* There will be no open session on Sunday 26th December 2021, open sessions will resume on Sunday 2nd January 2022. Members who have their own equipment and key can still use the lake. *

Please note: COVID19 restrictions will remain in place and we will operate as we did prior to this latest lockdown. The Changing rooms & Toilets will remain closed. A one way system & sanitation tables will be in place.

The club is now in open to the public on Sunday, 13.00 till 15.00 until March 27th. We invite you to come and try our taster sessions and see what our club has to offer.

The taster session allows you to take to the water and try out a kayak, Canoe or standup paddleboard. The club does not have wetsuits for use at the sessions so you will need to bring your own clothes or wetsuit that you don’t mind getting wet and can use for this session.

The availability is limited to 24 guests on the water for the session and this lasts the full 2 hours of our open Sunday club session.

Please familiarise yourselves with our Covid 19 operating guidelines to ensure you know what to expect and get the most out of your session. Covid 19 guidelines

Members of the club are not required to book in order to attend or make use of club equipment.

Newark Canoe Club was founded in 1991 with a few friends getting together every Sunday for a paddle.  With no club facility and unable to find a suitable venue in Newark to create a club, they looked further afield.  After an extensive search, they were offered a sub let at an old quarry at Thurlby, being operated by the then RMC company, now a part of the Cemex Group. That was in 1994, by which time the membership had grown to 30 people. However, as a sublet they found the costs of running the Club were higher than expected and were in danger of going out of business.

In 1997 the Club was given its own 10 year lease on the site with a fair rent paid direct to the new landlord, which enabled the membership to make long term plans for the development of the site and facilities. In 1998 a grant from Awards for All meant the first landing area and disabled ramp could be constructed, In the same year a further grant enabled the Club to purchase a storage container for equipment.

Between 1997 and 2003 the membership numbers grew from the original 30 to 120. In 2003, the annual membership fee was introduced to create a sustainable club capable of being self financing in the long term.

In 2006 the Club invested in a club house with toilets, changing facilities and a meeting room. In 2008, a further grant from Awards for All allowed the purchase of another storage container, boats and paddling equipment. This offered the Club the chance to expand its ability to offer paddling to all.

In 2011 the members made a further investment to expand the club house facilities to those that we see today.

In 2017, the Club was awarded the Newark & Sherwood District Sports Club of the Year.  In 2019 the Club celebrated 25 years at Thurlby Lake, with a party including a firework display, during the Annueal Open Weekend. 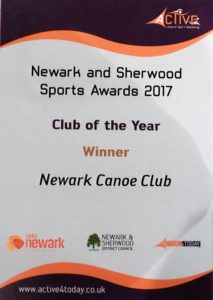